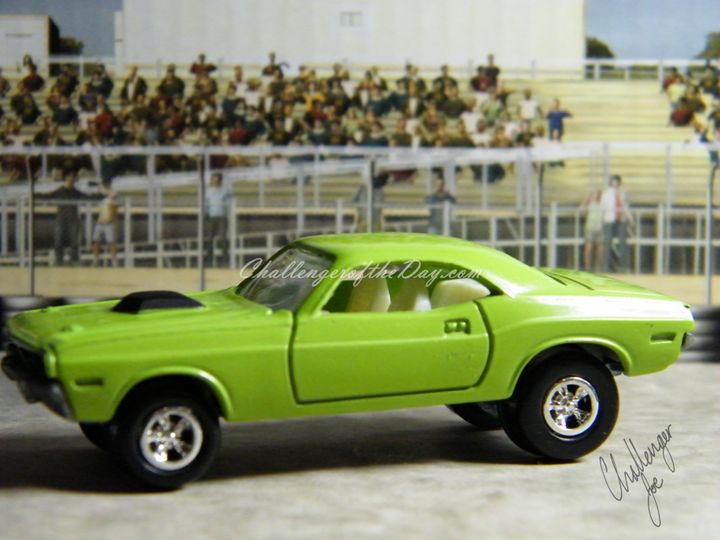 Today's Challenger is based on a 1970 in Sublime Green with a Shaker hood. This 1996 release is one of the first Challenger productions for the newest version of the Johnny Lightning Company. The previous owner, Topper Toys, was forced to close in 1971 due to business fraud. I point this out because they did not make very accurate reproductions in almost every detail. Unfortunately, the 1994 regrouped Johnny Lightning cars also had a similar problem. By 1998 they switched the Challenger up with a new body style that better matched the real thing. They also added side mirrors on both sides. Today's model is limited edition #13637 of a 20,000 production run. 1996 was also the year they added the numbering process to the limited edition runs. Now you knew what number car rolled off the line into your Plastic guarded, Cardboard backed little treasure. Every Challenger is special. Every one has it's defects and also is beautiful in it's own way. Let's talk about the special shaker hood now.

The Shaker is mounted directly to the engine's air cleaner and sticks out a hole in the hood. It moves along with the movement and vibration of the engine. When you rev the engine up it will actually shake. The point is to get more air into the engine. More air in the mixture creates a more powerful explosion and the resulting power is also increased. I understand that Chrysler literature once referred to this as the "Incredible Quivering Exposed Cold Air Grabber". It is one of my favorite hood styles although it is mostly considered impractical. Front grille openings and lower front end air flow can better transfer more air into today's version. The open vents on the hood now are strictly to cool down the engine. It gets hot quick when your pedal foot can't unstick itself from the floor.